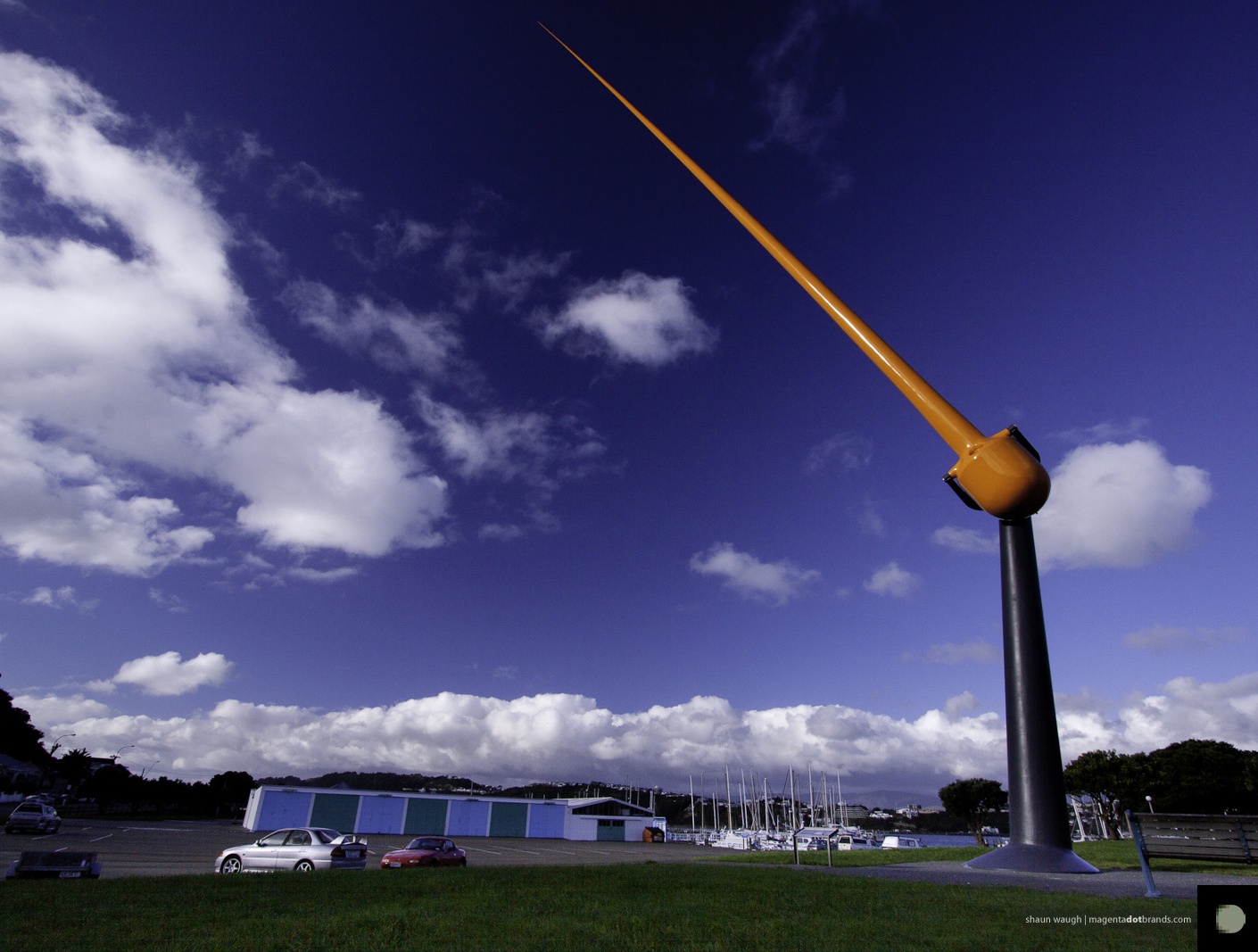 Wellington is located at the southern tip of New Zealand’s North Island and so it sits plum in the middle of the Roaring 40s, in addition the geography of narrow Cook Strait separating North & South islands funnels the strong westerly winds increasing their velocity and gustiness—which is why Wellington is known to Kiwis as “Windy Wellington”. Zephyrometer is situated in one of the capital’s windier spots en-route to the airport at Evans Bay which means it has been enjoyed by millions since 2003, and sees it regarded with some affection and pride by many Wellingtonians. My involvement with the Zephyrometer project began in 2002 when I was commissioned by Phil to illustrate a mock-up of the work and layout his successful submission to the Meridian competition. 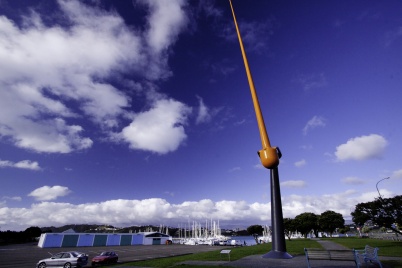 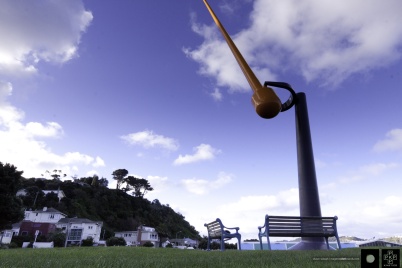 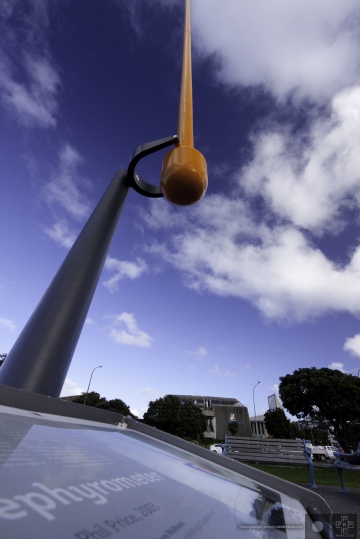 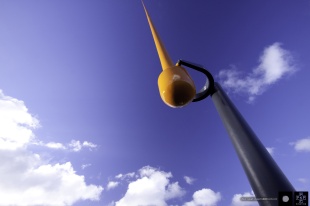 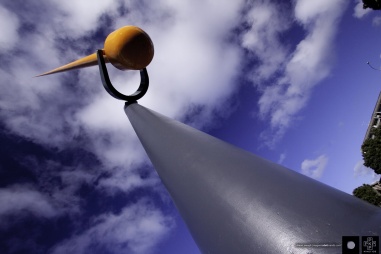 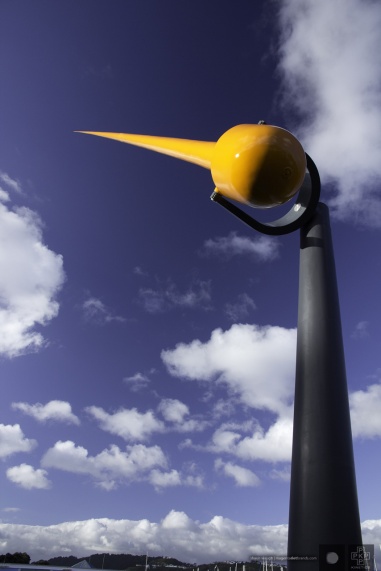 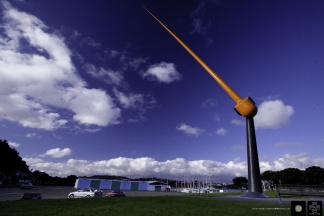 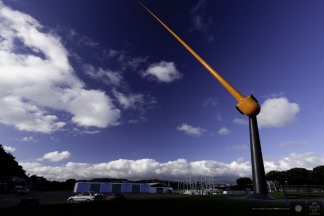 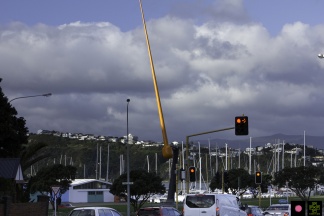 Zeph’ is a civic sculpture made by Christchurch artist Phil Price and was installed in 2003. It is a wind-and-gravity-activated kinetic sculpture consisting of a 3250 kg ‘balanced’ lead counterweight housed in a durable composite shell fixed to a gimbal at the base of a 26m tall needle. The gimbal consists of a pair of pivots that swivel at right angles at the base of the needle, the yoke pivot is akin to an ‘axle’ allowing rolling rotation of the 26m tall needle from 90° vertical down through to 0°/ horizontal. The yoke is in turn attached to a spindle or hub that allows it to pitch perpendicular to the rolling motion of the 26m needle.

The overall effect is that the wind causes the tall needle to swing, to ‘meter’ both wind direction and speed. But the invisible and often overlooked force that is constantly at work on the needle’s action, at the same time, is gravity, which imparts a pendulum action to the needle. Because of the gimbal gravity is always opposing the needle’s pitching and rolling movements, much like the action of a yacht’s keel on its mast. So gravity and the flex in the Spar Mast dampens down the effect of all sudden, violent shifts in wind speed and direction thereby protecting the moving parts from tremendously destructive shear forces. Gravity constantly acts on the 3250 kg counterweight making the needle relentlessly seek the rest position where the needle is perpendicular to the ground with the counterweight’s centre of gravity hanging directly beneath. Zeph’s action then is a composite of pendulum and wind vane. The clever tapered spar design means the action of the needle is self feathering, the nearer to horizontal it approaches the less windage the needle presents while at the same time the leverage exerted by the counterweight constantly opposes both pitch & roll. These clever design features have enabled Zephyrometer to ‘ride out’ the worst roaring Wellington westerlies and southerlies for over a decade.

The needle itself consists of a laminated Oregon Spar Mast skilfully sculpted by the artist to the tapered needle point over its 26m length. This spar is a single unit encased in a composite shell finished with durable automotive 2-pot lacquer. The composites used include carbon fibre, fibre-glass and kevlar. Steel, Kevlar and fibreglass are used in areas where very high strength is required such as in the housing for the steel pivot stub axles and one-of-a-kind custom-made bearings where the counterbalance weight connects to the yoke. Carbon fibre is used as much as practicable throughout the needle housing because the lighter the entire sculpture is, the more responsive it is to the wind, and the closer to a wind dance Zephyrometer’s action.

Sadly, on 14 August 2014 at approximately 2:30pm, Zephyrometer was struck by lightning during an awesome southerly change that slammed into Wellington, the strike was full on and devastating, leaving the tip of the needle blasted and frayed[1]. Fortunately no one was hurt. A spokesman for Wellington City Council confirmed that the “needle” is “completely stuffed”. [2] This slideshow carousel infographic depicts the instant of the strike.[3]